Autumn Sale - 15% Discount on all Products! Spend £60 (ex VAT) and Choose a Free Gift During Checkout!

Enjoy free shipping on all orders over £35 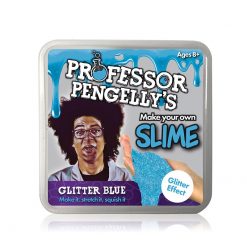 Glitter Blue Slime – Make it Yourself

After exploring planets way outside of our solar system, Professor Pengelly often returns to Earth with some space slime stuck under his moonboots. And, hes found that it just glimmers better than the stuff you get on our planet. So, to let the people of Earth enjoy some galactically glittery slime, he invented Professor Pengellys Slime in glitter blue!

This slime looks like it has the stars of the universe trapped inside it, thanks to the glitter pack that comes with the pack. Comes with you ask. Yep, this is a make-your-own-slime pack, which lets you recreate the experiments that Prof. P did to make this slime in the first place!

You get some clear glue, a catalyzer, a bottle of blue dye, a stirring stick, and a pack of galactic glitter! Youll need to follow the instructions, but its basically a case of mixing it all together and then stirring in the space dust (that is, the glitter).

Once youve made the slime, go ahead and play with it. It can be squished, squashed, stretched, and snapped! But, it might stain fabrics and other surfaces, so be careful where you play with it, and, whatever you do, dont eat it.

This slime is dazzling fun for kids, and its a brilliant stress-reliever for adults, too! So, whether youre 8 or 800, get your Professor Pengellys Glitter Blue Make Your Own Slime kit today!

Peace of mind: All of Pengellys putties and slime products have been tested to the highest safety standards and are fully compliant with EU Toy safety levels.

There are no reviews yet.

Do you have a question about this product?

Drop us a line by compiling the form below. We will be more than happy to reply to any of your questions!

We use cookies to ensure that we give you the best experience on our website. If you continue to use this site we will assume that you are happy with it.